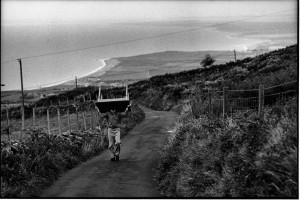 Simon Whitehead is a movement artist and lives with his family in rural west Wales. His practice is improvisatory, in response to the circumstances he finds himself in he makes work that moves in correspondence with land, materials and beings. He begins with, and re-turns to the motile materiality of the body and its agency amongst an assemblage of other forces, flows and matter. He is a maker that moves.

‘I have been engaged in an unfolding processual work with the Afon Dulais river that flows close to my home since 2006, a practice of listening to the river’s shifting seasonal frequencies whilst attempting to materialise these in sound. Immersing myself physically within the river I use the machinic sensitivity of a Fender Stratocaster to allow places of eddy, surface movement and interference in the river’s body to express themselves through the guitar’s strings. I am interested in what I am able to hear and feel in this diffractive, co-generated field and I make binaural recordings that serve as glimpses of this process.’ A limited edition of these recent recordings will be launched as an album in 2023 by experimental music label East Cape Calling.

Simon has hosted Locator since 1993, an ongoing experimental workshop researching ecological ideas through movement practice, situated in an ancient sessile oak woodland in Pembrokeshire. He is a member of Maynard Abercych, an interdisciplinary artist collective collaborating on a programme of engaged dance activity in the rural village of Abercych and lower Teifi valley, working through ongoing residencies, the village dance, workshops, local and international partnerships. He is also a Craniosacral therapist.

As part of an AHRC-funded PhD(PaR), based at the University of Glasgow and funded by the Scottish Graduate School, he is exploring what posthumanist thinking means in relation to expanded ecologies of touch. soft matter is part of this process of research-creation.

Since 1994 he has collaborated with Melbourne based sound artist Barnaby Oliver, a sample of their work is archived here: Untitled States